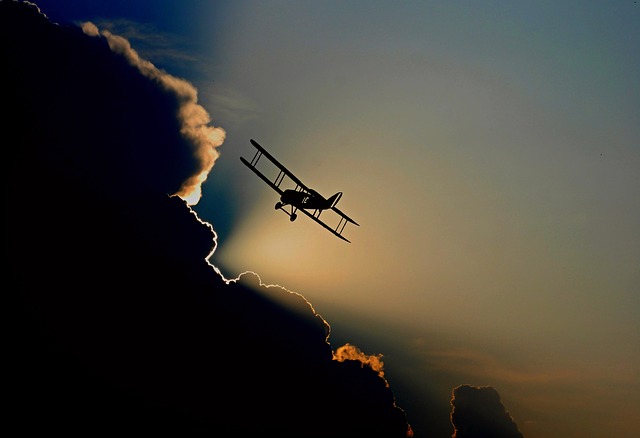 This August 19th, the anniversary of Orville Wright’s birthday, is National Aviation Day, a holiday established in 1939 by President Franklin D. Roosevelt to commemorate the development of aviation. Americans are encouraged to observe the day in ways that further stimulate interest in aviation.

In the spirit of complying, we’ve compiled a list of ways you might incorporate aviation related topics into your family history projects.

Spend the day watching movies and/or documentaries depicting the evolution of aviation. Perhaps start with the story of Orville Wright and end with Avatar. Encourage your children to place their ancestors in the proper time frame. Would Great-Grandma Adams have had the chance to board a plane? Is it possible your children’s great-grandchildren might fly a transport plane on another planet?

Twenty years ago, when my mother compiled all our family research into several large, bound volumes, she included a section where living family members wrote a piece about their lives thus far. One of the suggested prompts was to include “movies of interest.” Mom’s twin brother (and Cynthia’s father) wrote:

The movie Strategic Air Command had a significant impact on my 24 years in the Air Force. I saw this early fifties movie while at the Naval Academy. In this movie when the hangar doors opened and Jimmy Stewart stood in inexpressible awe of one spanking new B-47 jet, a thunderbolt went through my body. Three years after graduating from the Academy, I became a B-47 Aircraft Commander and continued to fly and command in a career I loved and respected until retirement in 1979.

2. Tell the story of your first flight

Was your own first flight memorable? Document it in a vignette for future generations. Include your age, your destination, your companions, and the details that made it memorable.

Following are the most memorable flights from Cynthia’s childhood:

The first flight I remember well was the Wein Airlines flight to Alaska we took when my father was transferred to Eielson AFB in 1962. During those days, your mom dressed you up for flights, and kids always were given pilot wings. From that day forward, Alaska provided otherworldly adventure, and our lives were governed by the Cold War since most of the pilots on the base were reconnaissance pilots keeping an eye on Soviet air activity. Even the base’s multi-colored runway lights in the eternal winter nights seemed magical.

However, our fathers also flew for fun on occasion and base pilots could rent Cessnas for recreational flying. One such memorable flight included a trip piloted by my father in one of these Cessna’s to a remote location for a few days relaxing in a cabin on a lake. My sister, mother, and our dog hopped into the little plane and flew to a beautiful and remote place on Lake Chandalar (about 200 miles north of Fairbanks) that couldn’t be reached by road (at that time anyway). We landed on a rough dirt landing strip and began learning about living in the Alaska wilderness from the older gentleman who ran the place. At the turn of the last century, the place had been a mining camp, so this caretaker amused my sister and me by teaching us to pan for gold and telling us stories of renegade bears who had plagued the camp. The food keeps, as I recall, were way up in the air to ensure that bears couldn’t raid them.  In 2013, National Geographic profiled a man who has been living near Chandalar since 2000 in the Brooks Mountain range, and his description reflects my childhood memories exactly!

Ancestry’s Fold3.com, an online database of military history, includes aviation-related images and documents, many of which you can explore for free. Spend some time looking at their World War II, Korea, and Vietnam collections. You may find some historical content you can weave into a family member’s biographical essay to bring their aviation-related military service to life for your readers. Also, Aeronautical Museums, visited in person or online, offer resources and images to enhance the historical details in your family history writing, whether writing about family members or artifacts related to their military service.

4. Ask an older relative to tell you the story of a memorable flight

As an Army pilot and test pilot, my father experienced many interesting flight encounters, some he could tell, and some he couldn’t. Cynthia used a digital recorder to record his telling the story of transporting a drinking priest to some locale in Southeast Asia. Now we have his unmistakable soft chuckle as well as his own musings on the story forever. Cynthia could never get her own father to say he hadn’t seen something he couldn’t explain on his reconnaissance missions around the world. She wishes she had a recording of that.

When your father is a pilot, it is easy to overlook your mother’s aeronautical adventures. So, recently, I asked my mother to recount a story of her own. She told me a story I’d never heard, one that allowed me to see her in a different light. The flight was her first transatlantic flight.

The flight was in 1963, in the heat of the Cold War. My father, an Army pilot, was stationed in Ankara, Turkey. After months of separation, the government had finally lifted the dependent travel ban and Mom and her three daughters—ages two through seven—boarded a flight out of Mississippi to join him.

Normally my mother is the epitome of confidence, organization, and well-laid plans, but when this commercial plane landed in Germany, Mom froze, frightened and uncertain what to do next. It was late at night in a foreign country, there was no military escort waiting to offer advice, and the airport was nearly deserted. She stood with three tired, hungry girls and watched the other passengers, one by one, disembark and exit the airport. Unable to speak German, she opted to spend the night on a grungy airport floor and wait until staff returned in the morning.

5. Use family artifacts to tell a story pertaining to flight

Gather any family artifacts you have pertaining to flight and tell a family member’s story through a short vignette—or even an artistic collage—featuring the artifacts.

Artifacts can tell a very compelling story without words, and Cynthia has an extraordinary example illustrating this. To document her father’s love of flying and his career in the Air Force, she gathered some of his most significant military memorabilia. Then she commissioned an artist to pull them together in a collage to create a visual story.

Below is an image of the artist’s work before framing. 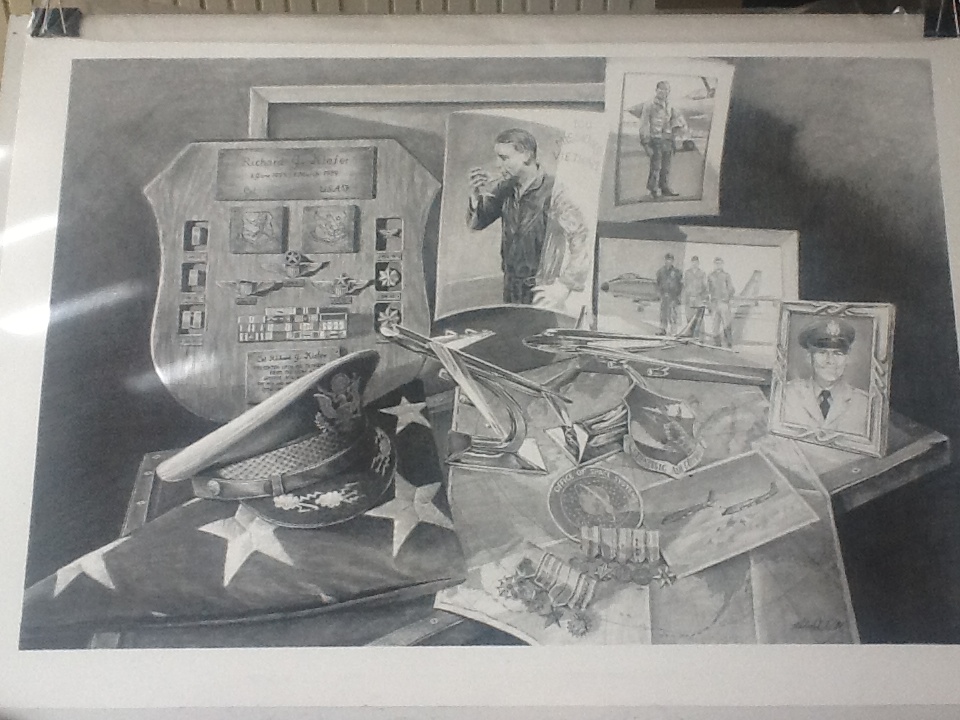 We hope at least one of these ideas prompts your own family history project. Please don’t hesitate to share your own ideas and thoughts in the comment section!

If you’d like to investigate some wonderful professional writing related to events and people in aviation history to inspire your own family history projects, consult our next aviation-inspired post, Recommended Reading to Inspire Aviation Focused Family History Writing. Consulting nonfiction books for examples of engaging and informative writing can provide just the models you need to inspire writing about the aviators in your own family history.