Honoring Our Veterans and Finding Family Treasures in Unlikely Places

One means of honoring our veterans is documenting their service in ways that will engage their descendants’ interest.

So, with that in mind, I began writing a narrative of my father’s journey to the United States Military Academy (USMA at West Point). The narrative is based upon a story Dad told me shortly before he passed away. I’ve been filling in the details by reading the letters he wrote his mother, interviewing his sisters, cousins, and roommates, visiting the Academy, and reading anything and everything I could find regarding the USMA at that point in time.

But it wasn’t until I’d plumbed every resource I could think of that I recalled the trunk I’d inherited years ago.

Just maybe, that trunk was my treasure chest.

My “treasure chest” is actually one of those nondescript, hard plastic storage containers sold in big-box stores. 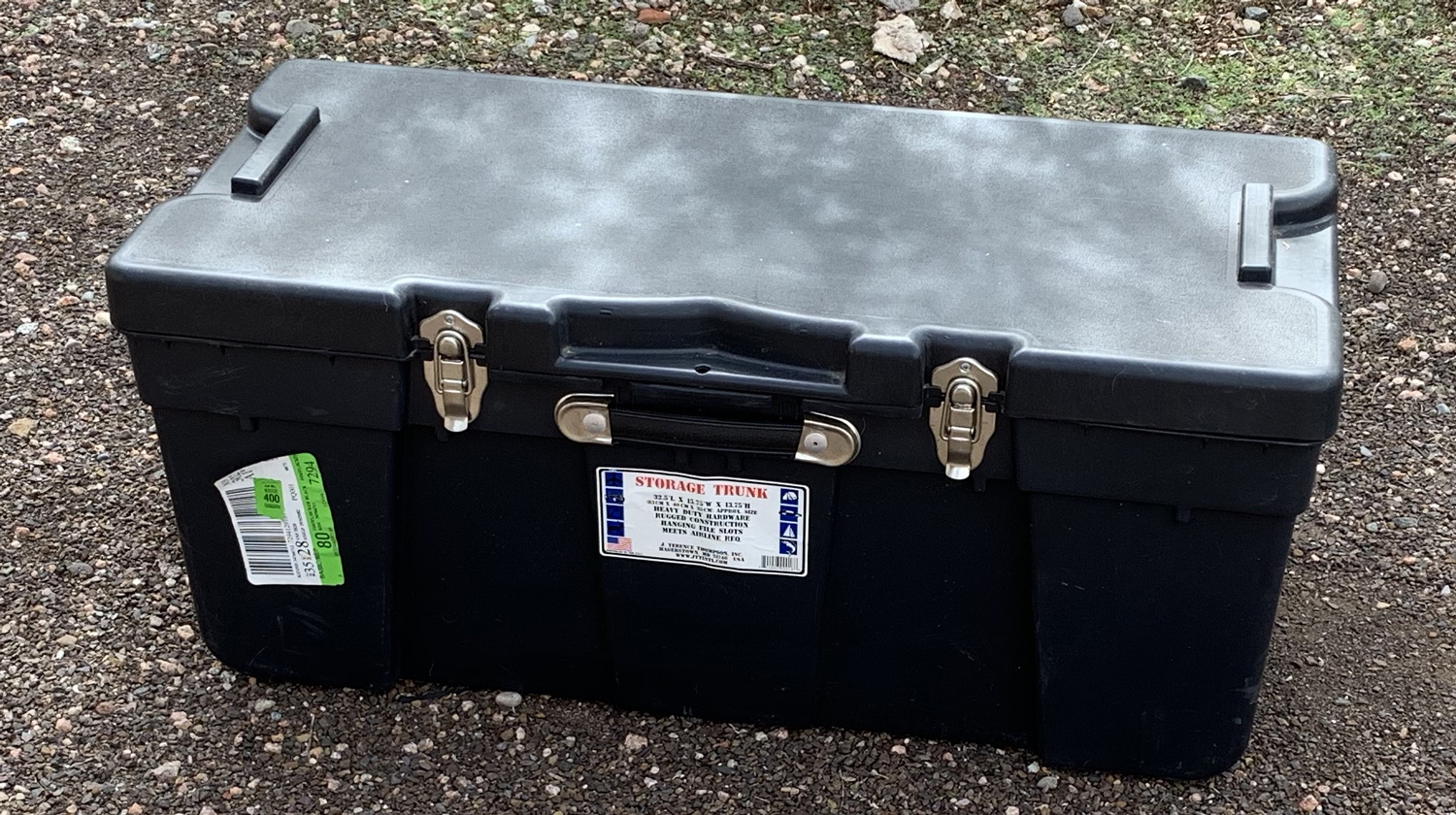 When I inherited it, I opened it only long enough to see that it contained a number of my father’s textbooks. Then, I stored it, thinking one of his grandchildren might eventually want it.

Now, however, I wondered if the trunk might contain treasures revealing telling details about his day-to-day life during his time at the Academy, details that would enhance my narrative’s story-world.

Perhaps I’d find some insightful notes in the margin of his textbooks, or maybe a letter from my mother pressed inside Napoleon as a General.

Inside the Treasure Chest

So, my husband dug out the trunk, and I opened it. After soldiering past the overwhelming reek of the “Damp Trap” packets stuffed inside, I found several treasures.

I found no letters, though Dad did write in the margins of Introduction to Differential Equations. These notes were as dry as you might imagine—all about the math, containing no private thoughts or long-held secrets. However, as I’d hoped, I found other items buried beneath the textbooks—one of his pocket bibles, two USMA yearbooks, and an Army-green, cloth-covered, three-ring binder.

While the bible with Dad’s jottings and the yearbooks were great finds, it was the dull-green binder that held my treasure. It was filled to bursting with large (7.5” x 7.75”) black and white photographs. Clearly taken by a professional, the photographs were in pristine condition, and the majority pictured my father.

When I flipped to the last photograph—one picturing a gentleman handing my father a model airplane—I realized the notebook’s purpose. Those photographs depicted the progress of two Army Preliminary Evaluations (APE) of the Mohawk OV-1D. 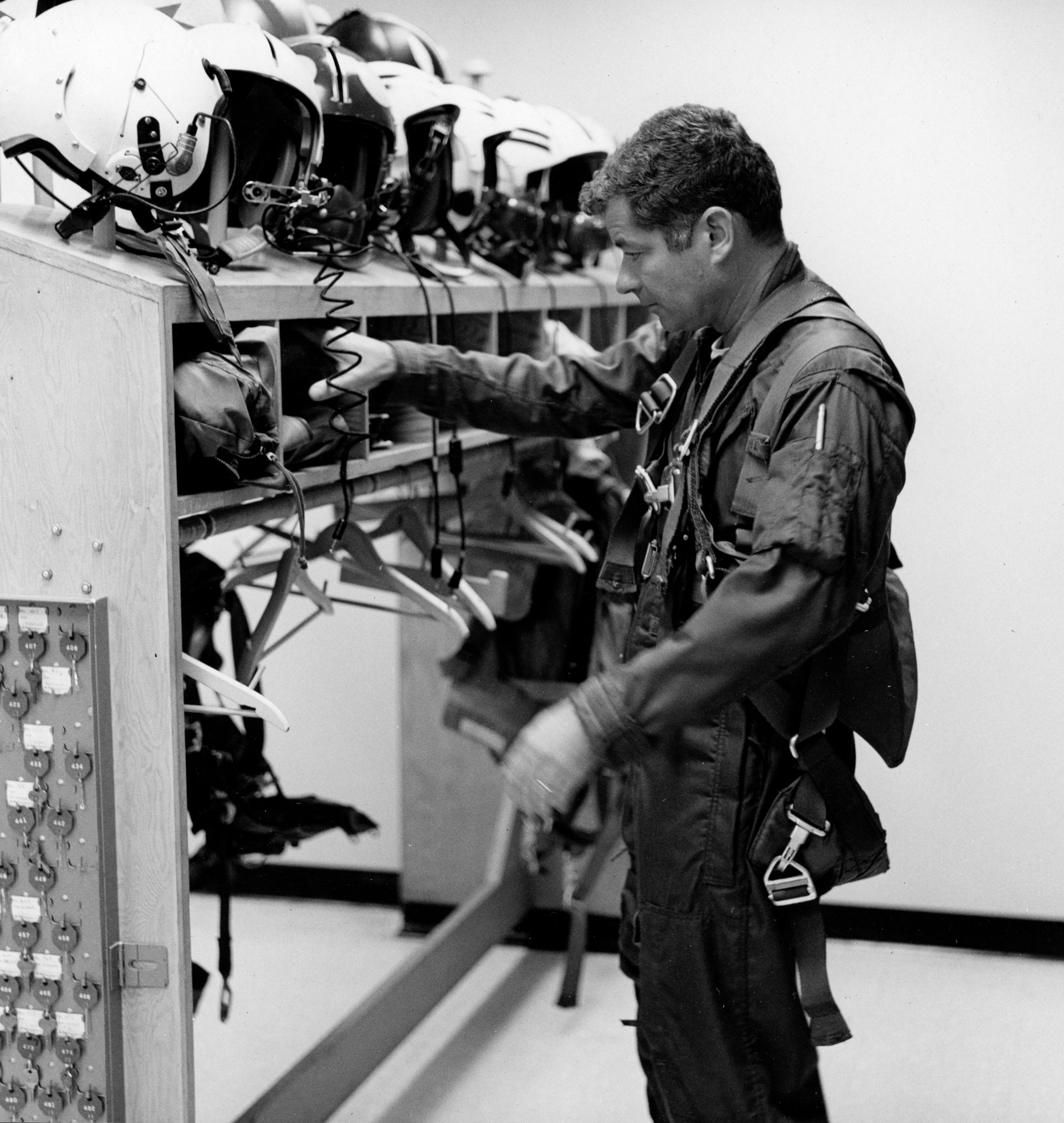 My father was an Army test pilot and flew many planes, both helicopters and fixed-wing. I knew which was which (helicopter versus fixed-wing), but nothing more. And while my father displayed two model airplanes in his home office for over forty years, I never thought to question why or what they meant to him. 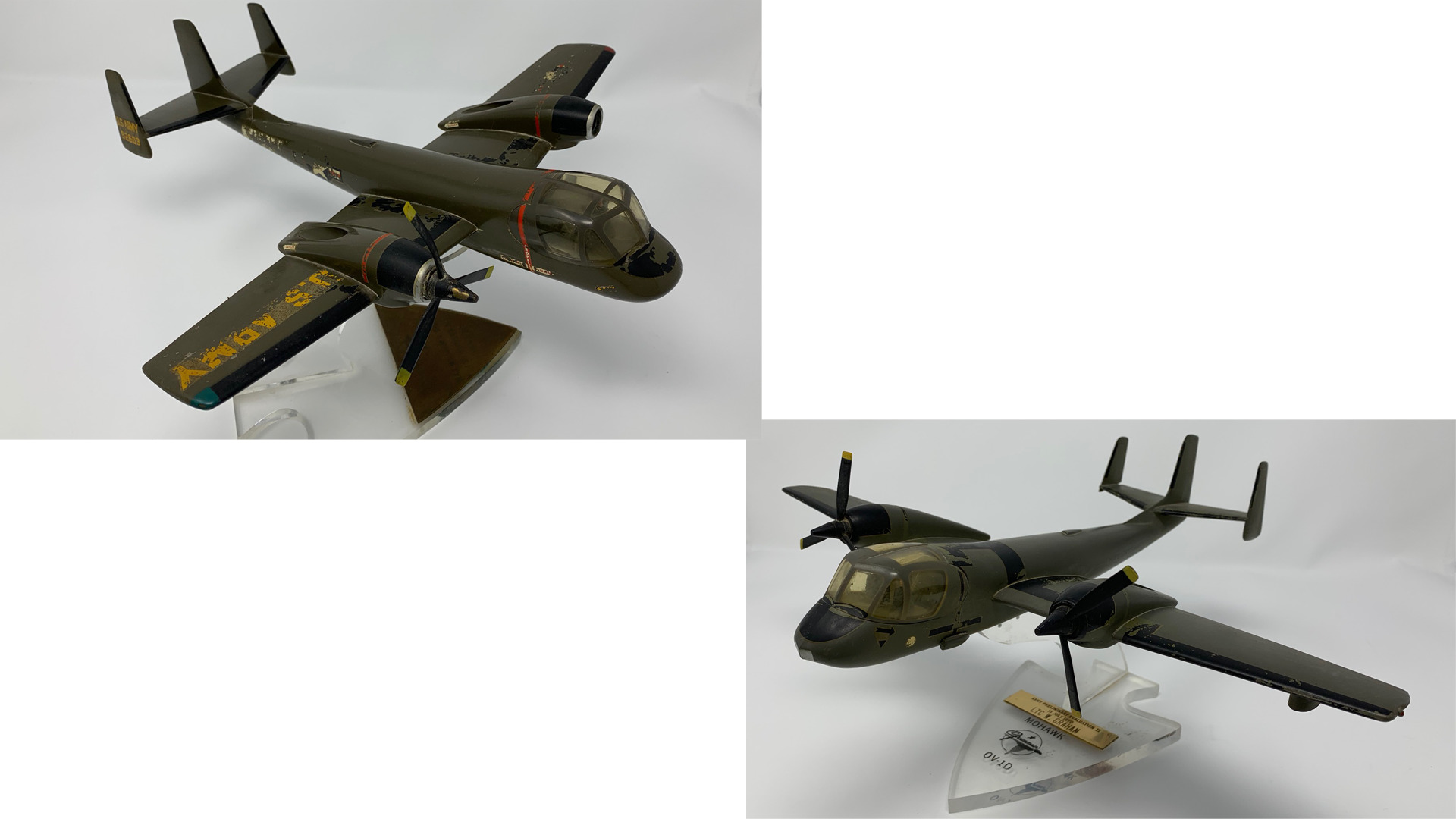 But now, thanks to that notebook, an artifact treasure itself, I know why. I learned my father was the Project Officer/Pilot for APE II of Grumman’s Mohawk OV-1D.

Dad participated in two preliminary evaluations, and the two models he displayed were of the Mohawks he helped test.

Now, I’ve been sidetracked, because I love delving into the stories behind my family’s physical artifacts. My ancestors cared enough to keep those pieces, whether it be for one generation or six. Not only that—they handled those artifacts. I believe each item still carries a bit of their energy.

So I set my narrative-in-progress aside and began another project, one I hope captures why my father kept those models. I had planned to have it completed by Veterans’ Day, to honor my favorite veteran, but it still needs work.

Then, it occurred to me I could gift my artifact project this Christmas to my family member who inherited the models. That way, the artifacts and the story will be brought together.

I’m excited about this new project, and it ties right in with the project Cynthia and I are working on, one that will help you tell your own artifact stories. We’ll post more about that soon.

In the meantime, think about your own long-buried family artifacts. Do you have an unlikely treasure chest sitting in your own attic or garage? If so, let us know what you find!

Historical Image of two men and model plane: Though this image is subject to copyright, its use is covered by the U.S. fair use laws because it is of much lower resolution than the original, it is only being only used for informational purposes, and its inclusion in this post, Honoring Our Veterans, adds significantly to the post because the photo and its historical significance are objects of discussion in the post.

Historical Image of pilot selecting helmet: Though this image is subject to copyright, its use is covered by the U.S. fair use laws because it is of much lower resolution than the original, it is only being only used for informational purposes, and its inclusion in this post, Honoring Our Veterans, adds significantly to the post because the photo and its historical significance are objects of discussion in the post.